Ralph Lauren will be celebrating the 50th anniversary of his company at Bethesda Terrace in Central Park during New York Fashion Week.

The fashion show and dinner, scheduled for September 7, will benefit the Central Park Conservancy, a private nonprofit organization dedicated to restoring and maintaining the beloved New York City park.

In 1967, the Ralph Lauren Corporation got off the ground by exclusively selling men’s ties. In 1971, it launched a line of tailored shirts for women that featured the now famous polo player emblem. By 1977, it introduced its signature cotton mesh Polo shirt in various colors.

Despite stepping down as CEO in 2015, Lauren remains a powerful voice in the company, as executive chairman and chief creative officer. Lauren seems quite fond of Central Park, celebrating the company’s 40th anniversary there as well, at the Conservatory Garden. Now 10 years later, he will use his half-century milestone, his victory lap if you will, to help preserve Central Park and all its cherished history. 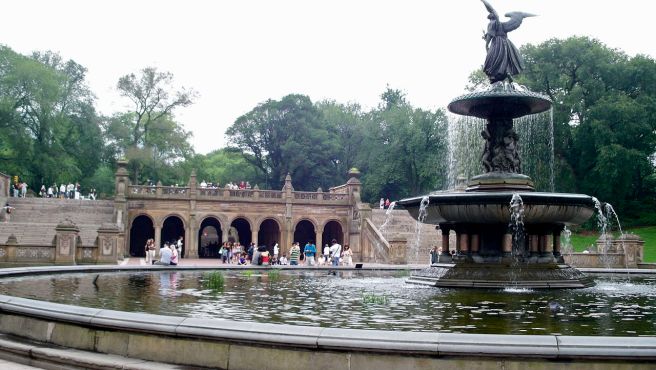 The Bethesda Fountain, is the focal point of the Bethesda Terrace, and is one of the largest fountains in New York City, measuring twenty-six feet high by ninety-six feet wide.

It is the only sculpture to have been commissioned as a part of Central Park’s original design.

Known as Angel of the Waters, the neoclassical fountain features an eight-foot bronze angel who stands above four small cherubim representing health, purity, temperance, and peace.

The angel herself carries a lily in one hand while the other remains outstretched, poised in the action of delivering a blessing on the water pouring from around her feet and into the basin at the bottom of the fountain. This is to commemorate the 1842 opening of the Croton Aqueduct, which supplied New York City with fresh water.

Angel of the Waters was designed by Emma Stebbins in 1868 and dedicated in 1873, at which point Stebbins became the first woman to receive commission for a major work of art in the city of New York. Stebbins linked the new, pure city water flowing from the fountain to the healing powers of the biblical pool, and quoted John 5:2-4 at the statue’s dedication, saying

“Now there is at Jerusalem by the sheep market a pool, which is called… Bethesda… whoever then first after the troubling of the waters stepped in was made whole of whatsoever disease he had.”